Here’s the second brew of the night. I picked this one up because it said raspberry on it and went with the fruit beer theme. But, I’ve never actually had a beer from them, which is surprising because a lot of their brews get rated very well. That and the bottles are adorable. I even like the labels. Let’s crack it open. 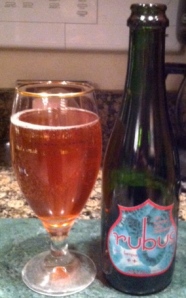 Trivia: According to greatbrewers.com, “Rubus Lamboni is a sour ale made with rasperry infusion. The raspberries used for this unique ale are from the Sudtirol Alps in the northern part of Italy. Made with pilsner malt, caramalt, and wheat malt, this beer pours a clearish gold with pink throughout. The head is white with very nice retention and lacing. The aroma and taste contain influences from raspberry juice, tea, spices and a mild strain of wild yeast. Considerable carbonation, light and easy to drink.”

Random: It seems as if raspberries are one of the most popular fruits to include in beer. Not that I’m complaining. I’m always down for a good raspberry brew.

This brew poured with a half a finger of white head that dissipated quickly and left no lacing on the glass. The body was a clear mahogany color with almost no visible carbonation. The nose had a lot of fresh raspberries and a hint of funk. I really enjoyed the nose. The taste was definitely under carbonated. There was also a significant amount of raspberries on the taste, but the tartness took center stage on this. It also had some barnyard funk to it. The body was light, which made the lack of carbonation more apparent. The finish was pretty long and tart. I thought this would be much better. I wouldn’t have it again, but it came in a cute bottle.